Day 12 of #222days: The Media and Avatar. Why Are They So Reluctant to Report? 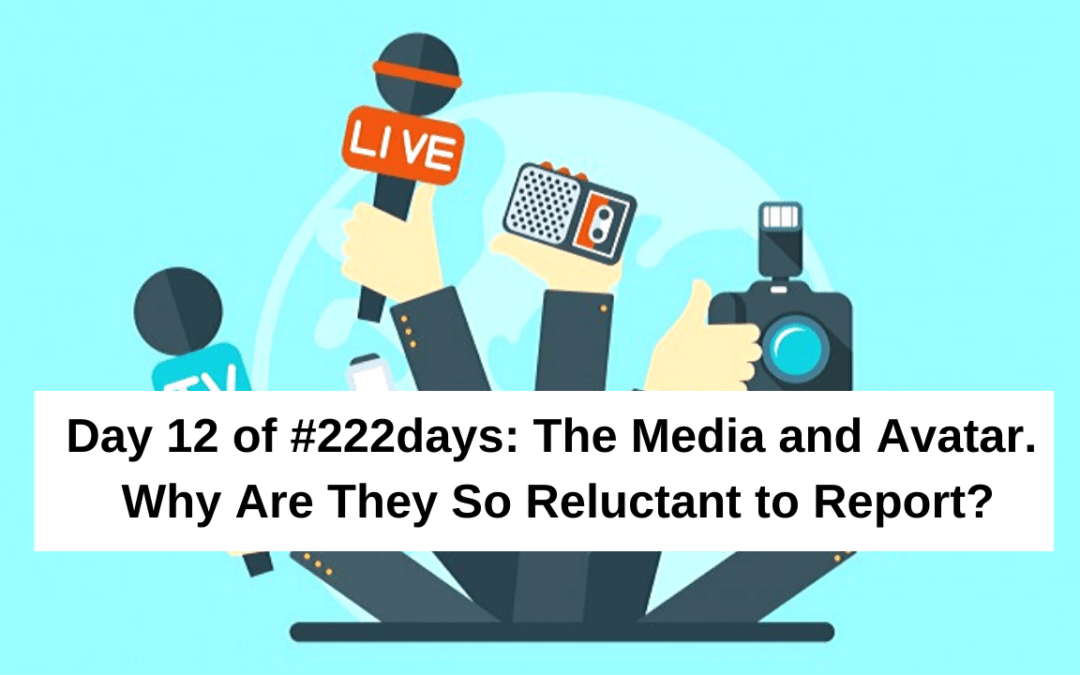 Many times people ask me, why has Avatar not had more media attention?

Or, we need more Press coverage!

So, here is what I have found to date.

Over the past few months, we have been working to get media exposure, specifically in Australia and New Zealand at this stage.

As you can imagine, it is a massive job exposing an organisation such as Avatar, in addition to providing a support platform and campaigning to inform potential students of Avatar’s true intentions.

Therefore, we have first focused the majority of our time here in the Southern Hemisphere.

What have we discovered?

To date, we have found a real reluctancy for the media to report here, for a few main reasons.

(1) The connection to Scientology and the leaders background/history.  This seems to really freak out the Press and any type of media outlet, due to the heavy handiness of Scientology and their reputation to bully, harass and litigate.  There was once a time when Stars Edge (Avatar) was exactly the same.

(2) Defamation laws.  Our defamation laws here in Australia are pretty tough for those who want to share the truth.   Although I personally have always tread lightly and have set things up a certain way to stay within defamation laws, and also the fact this expose covers dozens of countries – media outlets within Australia regarding the experience of Australian’s are wide open for litigation if they share anything which can defame another.

They tend to steer clear of cultic organisations, unless there has been a court case which has brought corrupt practices to light, or the involvement of law enforcement.

(3) Lack of strong evidence and personal statements.  For a media outlet to report on an organisation, they need a good amount of statements, interviews, etc – in addition to hard evidence (i.e. audio and video recordings from inside the organisation).

Although we have evidence from a variety of people in terms of what we share and do at Avatar Uncovered (if we didn’t, I would not share it as I am then at risk) – MOST people will not share their experiences or statements with a media outlet in the fear that:

a) they have no control over how the media will report on their experience;

b) humiliation they were in a cult;

c) fear of how people in their community will view them; and

d) the fear that they will get harassed, bullied and ruined by Stars Edge and it’s leaders, who do not have a good history when it comes to bullying their critics, especially those who have been further up the hierarchy and have more of their ‘inside’ secretive practices.

In addition, I don’t know anyone to date who would have even thought of filming or recording what is going on inside Avatar.  With the amount of indoctrination and fear – it is very unlikely you would just decide to get out your voice recorder or start filming what is going on.

If you got caught – could you imagine the repercussions?

An example of the media’s reluctancy is the New Zealand Herald, who did a 2 page spread on Avatar back in 2014.

We were in discussions with the NZ Herald recently to do another piece detailing the more worrying practices of Avatar.

Nothing was reported in the end as they have said that they received so much hassle from Stars Edge and Avatar last time, it is not worth the risk for them, due to the amount of resource and time which was invested in dealing with the aftermath.

If you do not know, this whole report ended up going to the Press Council, where the complaints were rejected.  However, it cost them time, money and apparently a lot of harassment from Stars Edge (Avatar).

You can read my debunk and read the Press Complaints here>> https://avataruncovered.is/debunking-the-nz-herald-article/

How about in the future?

On a positive note, we have a couple of potential reports coming up and some possible podcast coverage in the New Year.

However, I thought I would share with you all the reasons there has been this reluctancy to date.

For me personally, I’m still gobsmacked that Stars Edge and the leaders believe that harassment, bullying and intimidation are the most appropriate tactics when dealing with Press coverage (which has been based on people’s “true experiences”).

Instead, why are they:

Not addressing those they have harmed?

Continuing to lie to people to bring them into Avatar?

Not compensating those who have been seriously exploited?

Again, these are not the actions of those who are creating a ‘responsible’ and ‘enlightened planet’ and who are supposed to be awakened and fully conscious human beings.

Nor is it the actions of a responsible and caring CEO of a company who has such a large goal to help humanity.

Tomorrow, Day 13, I plan to have a video made.  I’ve been staying at a friends temporary as part of my move and just have not had the space or privacy to make videos or run interviews as I have planned.

But they will be coming soon…..

Have a great week.

DO YOU HAVE A STORY YOU WOULD LIKE TO SHARE?  MAYBE YOU HAVE SOME INFORMATION WHICH COULD HELP OUR INVESTIGATION?

Disclaimer: The purpose of this expose is to warn, educate and bring the truth to the surface - potentially saving lives and preventing any future victims. We do not intend to slander, libel or harm anyone mentioned in this expose or throughout this website. This expose is based on the opinion of the author regarding their personal experience, an investigation undertaken, reviews made on the internet, reviews received, interviews carried out, evidence received and retained, and a full assessment made against credible cult expert 'models' such as the Bite Model, Singer's Six Conditions and Lifton's 8 conditions.